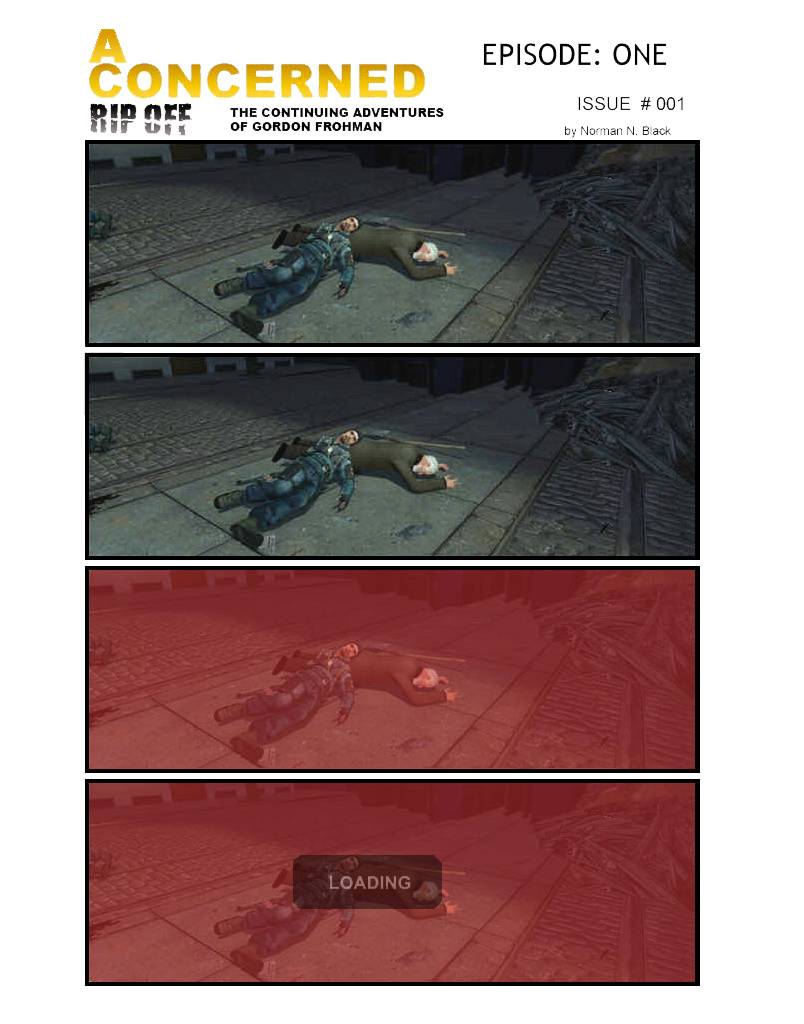 This is the first comic of the Rip-Off series (obviously). The entire layout of the comic was before I had down a real format that I was trying to adhere to, and when I still didn't have most of the fonts Chris used in Concerned. I didn't add in the chapter name until later for that reason. The funny thing is that this entire comic is a true rip-off in all meaning of the word. The images in each panel were taken from the last comic of Concerned through the use of that handy-dandy screenshot button. The hard part of this comic was the fact that the original frames of his comic all had speech bubbles in them and that each panel was darker than the other in a sort of fade to black way. I had to take two of the panels, adjust the brightness of each so that they matched each other, and then erase the speech bubble and hope that the 2 panels were close enough in brightness that it wasn't noticeable that there was a big hole cut in whichever panel was on top. I think it worked out pretty well, although something could be said for the image quality. I think I'm going to keep it though, just to keep with the whole rip-off theme. Lastly, the loading picture in the final panel was also cut out from one of Chris' comics as well. I was too lazy to turn on Steam, start up the game, and then try to get a screenshot of the loading screen, so I just cut it out from the issue where Frohman and the combine are driving through the tunnel.

Reply Christopher Schweda
10:49 AM on November 30, 2011
Ive read all of the comics you made so far and, in my opinion, you are doing a fantastic job! The humor is kind of similar to the original! Keep up the awesome work!!!

Reply harisjuna
2:54 AM on September 15, 2010
Well.... round about every blog posts online don't have much originality as I found on yours.. Just keep updating much useful information